This is a particular favorite of mine.

It’s a bit like the old days: long stretches of unallocated time and the vague seeping fear of impending limits. The long-feared Deathly Job never came to permanently pluck the flower of my budding artistry, but I’m good enough at manufacturing impediments on my own. I have to sit down and finish a comp syllabus this week, and it’s been like the dream of a hill that you can’t climb, not even in a lucid dream, because your mind has knots to unravel elsewhere. I don’t know what the knot is. I haven’t been working on the book—I worry that there’s Thalidomide in the air, that it would lose its fingers. So I cleaned the bathroom. And the difference between then and now—without which I don’t know where I’d be—is that now there’s someone to come home and notice that the bathroom has been cleaned.

The comment box sent me a news story linking to a PDF on a cryptographic mystery in San Jose; for the surprise factor, I would recommend first reading the PDF on its own.

I’ve been continuing to read Xenophon slowly in the Loeb edition, understanding most of the Greek only after checking the translation. I was on campus, hiding from punishing August under a redwood, and got to this part:

After the evening meal Proxenus and Xenophon chanced to be walking in front of the place where the arms were stacked, when a man came up and asked the outposts where he could see Proxenus or Clearchus—he did not ask for Menon, despite the fact that he came from Arianus, Menon’s friend. And when Proxenus said “I am the one you are looking for,” the man made this statement:

And goes on to warn them about a risk of attack. Xenophon hasn’t taken command yet and is still a minor character; this is one of the first of his third-person appearances. But something about the humble details of the incident—the dinner, the two friends walking, versions of words actually spoken in fifth-century-B.C. air—gave the scene a bizarre solidity in my mind. I wondered about the falling sunlight, the arrangement of the stacked weapons, whether their skins itched. The effect was happenstance, I think, dependent on my trying to learn the language (and on it being a historical account), but any writer who could consistently evoke it would have the devil’s own power. I remember something like it happening with Tolstoy, and I wonder if that’s what John Gardner meant when he said (if I’m not misremembering) that Tolstoy was at his best when at his strangest, and that strangeness is the one quality an author cannot fake.

“The Steak Place” by The Fall caused me to dream of a steak substitute brand-named Pleasant Pleak. It was indeed pleasant; I think it was breaded.

I’ve been working out the love affair with Barbara Stanwyck that I should have begun as a younger man. Yesterday I watched Double Indemnity on my laptop while hanging out with some cats, in Oakland, where I have been cat-sitting. I split this up with all my note-taking on Henry James, which was getting to such an unmanageable point that I had to write—well, it isn’t really a “program,” but an HTML document with a bunch of JavaScript to keep it all organized. 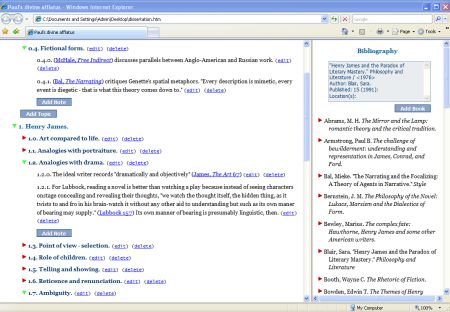 The long-term projects are fighting each other for space and the novel got shunted into my parietal lobe, where it is humming. I haven’t had anything to show for a while. Each thing rides its own very long conveyor belt. When at last they reach the end, they will fall clear out of the factory, and I hope that someone will then take pity and put them to bed.

I was in the library looking for some critical articles to assign my class this fall and ran across this passage:

In China, self is largely a function of one’s social identity (shaped by the Confucian values of duty, filial obligation, and piety). Confucianism, Taoism (China’s indigenous religion), and Buddhism share the central belief that “self-cultivation involves the development of selflessness, and therein lies the perfection of the self” (Hegel 7).

And my eyes about popped out of my head. They’re citing Hegel as an authority on Chinese society? I showed it to J., we goggled, then I said, “I’d better check the bibliography and make sure it’s not a Chinese scholar named Bob Hegel or something.”

Hegel, Robert E. “An Exploration of the Chinese Literary Self.” Expressions of the Self in Chinese Literature. Ed. Robert E. Hegel and Richard C. Hessney. New York: Columbia UP, 1985. 3-30.

wait, wait... The Phenomenology of Mind was written by a chinese scholar named Bob Hegel? The hits keep coming!

No, that's the Phenomenology of Spirit! I know it's easy to confuse them.