Zhao Mengfu, Autumn Colors on the Qiao and Hua Mountains, 1294

Denis Johnson died of liver cancer at age 67 on the Mendocino coast. J. and I agree that seems like a good place from which to go. One of the obituaries, needing to be Fair and Balanced, noted that B.R. Myers had panned Tree of Smoke in the Atlantic; the pan starts with Myers admitting that this is the only Johnson he’s read and he doesn’t get it. Tree of Smoke isn’t my favorite novel either and I don’t think Myers is generally wrong about the faults he calls out, but what a wasted opportunity, to have just trotted him out for another installment of his check-the-naked-emperor routine (which makes me laugh when directed at Jonathan Franzen) instead of giving the job to someone who knew Johnson’s early work and might have been able to tease out how, in this case, the formal demands of the Latterday American Novel defeated one of the best writers we had.

I have Angels, Fiskadoro, The Stars at Noon and Jesus’ Son still on the shelf. I remember reading The Stars at Noon for the first time, discovering those sentences from “The Sprawl” that I thought Kim Gordon had made up herself and getting the secret handshake... but Fiskadoro is the one I’d like to reread now. I met Johnson in person twice and both times came away with an impression of sentiment and humility. (The first was in October 2001; someone asked him what is the duty of the writer in these times; he said he had no clue.) If there had to be some unavoidable name while learning to write in the oughts, we could have done far worse.

Sixteen years later and I’m still sending out queries on the weekends; at least everyone takes email now. Hot and cool weather is incompletely mixed in the yard. The literary agency websites explain that their agents are committed to working closely with authors over the course of their careers. A liking for historical fiction is characterized as a “soft spot.” The agent may have recently moved to the suburbs in order to cook in a full-size kitchen. An entity that cooks in a full-size kitchen is no bean-counting algorithm: no, something warmer.

My public-sector job is in part founded on the promise of a pension, which is as likely still to be there when I need it as any other common good in this country. Living with an eventual pension in mind injects an element of providential thinking into one’s life that I don’t like. Charity is a virtue, faith is sometimes a virtue, hope is pernicious. If one dies of liver cancer at 67, the pension has not much mattered, unless there’s someone who depends on you. Of course people depend on you. I’d like to start another project but it’s too soon, the last project too distracting as it flickers in and out of reality with every new email.

Without a calling to hand, there’s only labor and pleasure, and the endless rebalancing of one’s portfolio between the two. We should do better.

1: I saw a hawk today. I don’t know what kind it was. It was small like a falcon, with a striped tail, brown everywhere else.

1: Probably a sharp-shinned hawk. Why was it named for a feature that’s impossible to make out from a distance?

2: It might have been named in an era when people shot birds to identify them.

[Explanation of Dick Cheney shooting birds and shooting people in the face.]

Child: I hope he shot a parrot.

[Explanation of what is a sick joke.]

Child: And that’s how he would learn, some animals are annoying.

Meng’s [Meng Yujian, (active ca. 1325-53)] paintings were popular during his lifetime but critical opinion was not entirely favorable; the T’u-hui pao-chien says of him: “His works are very delicate and pretty, but he cannot avoid an air of skillfulness.” To accuse an artist of being skillful was, of course, to relegate him to a lower rank.

—James Cahill, Hills Beyond a River: Chinese Painting of the Yuan Dynasty

Last summer the Berkeley Art Museum uncharacteristically rotated the Cahill collection out of its set of by-appointment-only cabinets, and I only managed to go see it once. More recently I found myself in a beautiful reading room of the campus Asian studies library, facing thousands of books I couldn’t read; so I went looking for volumes with pictures and got lost in Cahill’s account of the Yuan.

Su Shi, in the Song era, is tagged as the first to have said that “anyone judging painting on the criterion of likeness is the next thing to a child.” He would have been already exiled from court when he said it, without others around to take up the provocation. So he kept going on his own, painting weird rocks and trees:

instead of comprehensible academy landscapes in the Guo Xi manner: 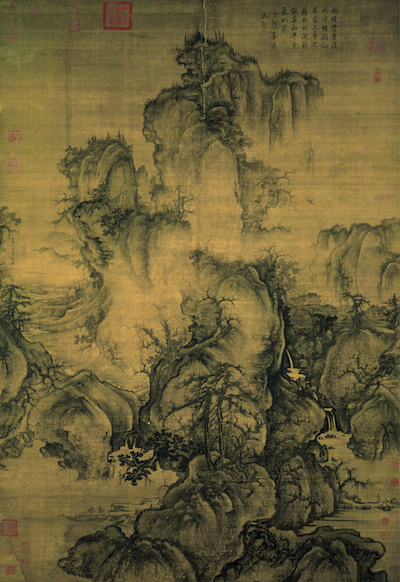 It wasn’t until after the Mongol conquest that Su’s aesthetics were more broadly taken up, because all at once the country’s entire educated class found itself in Su’s position. They couldn’t get jobs at court (and if a job was offered, tended to reject it out of principle); centuries of prejudice against artisans barred them from painting for money. They gathered far from Kublai Khan’s capital, around the lakes of Suzhou, and with Su as a model began to elaborate an intellectually demanding coterie art, aggressively amateurish in technique and defying court and marketplace alike. Looking back from the Ming, the painter-writer Gu Ningyuan wrote that they “were all men of great virtue and succeeded in concealing their technical skill. They were afraid of becoming famous through their painting and of not being able to avoid the entanglements of the world. Only Zhao Mengfu stood out brilliantly and competed with the famous masters of the Tang and Song periods. He was very bold, but when he became a high official, he must nevertheless have found his great skill in art an embarrassment.”

Their works are often compared to primitivist and expressionist movements in Western art, but in this social context they remind me of nothing so much as underground rock—any of those indie or art-punk modes that deploy bluntness and naivete as a code, because only the right people are supposed to get that it’s smarter, and is working much harder, than it seems. 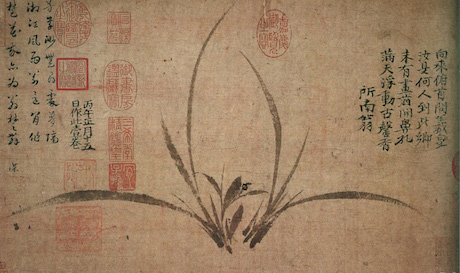 The scholarly class was trained in calligraphy rather than painting, and not only are these new paintings suddenly covered in writing, the forms themselves are written with the calligrapher’s brush. Each leaf and petal of Zheng Sixiao’s orchids records a single stroke, and is thus subject to the performative demands of calligraphy. Every nuance of the hand’s motion is recorded, and can’t be erased or revised once it’s laid down, making for a record of performance as intimate and unsparing as two-track tape. The concept of qiyun (氣韻) had been a touchstone of art criticism for centuries, and had seen many redefinitions; for the Yuan, it meant the signature expression of the artist’s temperament, as opposed to technical skill or verisimilitude. Art books render the term as “spirit resonance” or “spirit consonance,” but surely what we’d call it over here is “soul.” The Yuan take on qiyun is whatever makes two chords on Lou Reed’s guitar Lou Reed chords and nobody else’s; whatever makes a line into a Lou Reed line as soon as he opens his mouth.

The famous story about Zheng’s orchids is that someone asked him why the orchids were rooted in empty space. Where was the earth? “The earth has been stolen by the barbarians,” said Zheng. The painting’s space used to be emptier than it is now—the seals and much of the writing were added by later admirers—but one passage on the left is in Zheng’s own hand. “If you ask me for it, you won’t get it,” he says; “if you don’t ask for it, I might give it to you.” That’s as arch toward its audience as any liner notes I can think of, and quite a familiar gambit of the dispossessed.

Whether or not one eventually succeeds in selling a book, the failures to sell it always come first. It’s a very long process that demands virtually no active participation, to the point that one can easily forget it entirely. Where, you wonder, are these punches to the ego coming from; why am I walking around like one of Dante’s sullen in the sun and sweet air; am I really too much a failure and a fraud to show my face in the street? I’m drawing a paycheck. I didn’t feed the national monsters. Then you notice and tug at the odd thread in your mind, and out comes everything that was attached, decaying and dark green like anything that’s been too long down the drain.

There’s some relation here to John Scalzi’s Brain Eater, though my line went horizontal rather earlier and faith in an indifferent, unpurposive universe is a good guard against conspiracy-mongering.

I’d like to distinguish legitimate grief from the needless flailings of bruised ego. “... should very likely have labored damnably over the Buddhists and the Stoics,” wrote Henry Adams, trying to describe the corner he’d been driven into. He hardly had any Buddhists in decent translation to choose from.

Next time, paintings of bamboo plants.