Caterina has been talking about hobbies as time-suckers and distractions from one's real work. I have wondered about this, considering how much time I spend tinkering with this site, messing around with the four-track, drawing (now), etc. But I am no longer so insistent about the work. The point is not to enslave yourself to the work—the point is to be a human being. I mean, books will probably result, because in my case being a human seems to involve generating text, but other priorities exist and a balance must be found. It would be horrible to take away Nabokov's chess problems and butterflies, and get nothing in return but another book or two. This is miserable work in many respects, and while the aesthetic rewards of a successful piece do provide compensation, those of us who practice it should not deny ourselves the opportunity to live. Really.

My nineteen-year-old self would be horrified to hear this, but then he was terribly serious and single-minded, both jaded and naïve, intoxicated with himself in the mornings and hating himself in the evenings, smoking far too much and absolutely determined to be a poet. 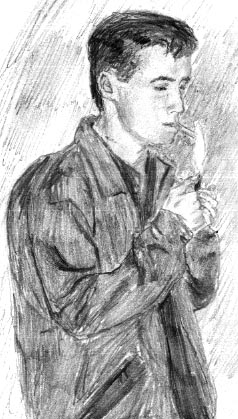 Nabokov wrote somewhere—this will be a misquote, because I can't find the passage:

There is no more pure love in the world than the love a young writer has for the old writer he will someday become. Toward his younger self the old writer feels, at best, a certain indulgent embarrassment.

Now—this is not connected, but now—I have this nightmare scenario where the United States attacks Iraq, and Iraq responds by lobbing missiles, probably laced with chemical or biological agents, at Tel Aviv. Israel counterattacks—in the worst version of this nightmare, it counterattacks with nukes—and suddenly there is a U.S.-Israeli war against Iraq, and at that point will the rest of the Muslim world stand by?

Hegel's language is sometimes apt. The horrors of the twentieth century came out of competing theses within Europe, and seem to have resolved at last into a synthesis where Germany makes our Cipro and even Russia is coming into the fold. (Bosnia was a brief, nasty coda.) Hegel would say that the horrors of the twenty-first century will come from this newly synthesized West battling it out with the rest of the world. Of course it's reductive. But if you take a very long view.