Here's another Postmodern Big Novel with a fairly obvious debt to Pynchon. Suddenly everyone feels entitled to write these.

Zephine Humphrey, Cactus Forest. I found this at Acorn Books in San Francisco, and it is indeed a Tome That Time Forgot—mine is a first edition from 1938, and for all I know it may be the last edition as well. Google returns precisely one match. Zephine and her husband are native Vermonters, but the husband's sciatica forces a relocation to the middle of Nowhere, Arizona. This being 1938, basically all of Arizona was Nowhere. The tone can be overly cutesy, she shamelessly uses sentence fragments, and our local deconstructionists would have a field day with her descriptions of the Mexicans; nevertheless I enjoyed it, largely because the casual narration afforded a time-warp effect of actually speaking with someone from the thirties. There's also plenty of local interest in seeing just what the state was like.

But in Arizona books are negligible. The libraries are few and poor, the bookshops are generally run in connection with some more popular industry and display only a meager assortment of the best sellers of national repute. It is of course true that we in the East are apt to read far too much. It is also true that the habit of contemplation induced by the desert is more valuable for soul growth than the habit of intellectual curiosity. A few really good books, carefully read in the desert, with long pauses between the pages, nourish the reader better than a dozen volumes rapidly skimmed. Nevertheless, there is a lack here which the New Englander feels, an indifference to, an ignorance of, interests which he takes for granted among his comrades at home. It is a shock to converse with an intelligent Arizonan and suddenly find that he has never heard of, say, Edwin Arlington Robinson.

I thought I had never heard of Edwin Arlington Robinson until Google informed me that he's the one who wrote "Miniver Cheevy." Probably Arizona could live without that.

Because of the spread of irrigation and of paved roads, the various forms of cactus growth are imperiled. In a shop window on the main street of Florence was a conspicuous placard which we often pondered. It displayed a picture of a large sahuaro and, underneath it, bore a printed paragraph to the effect that the giant cactus is more and more giving place to fields of melons, lettuce, artichokes, celery, and other crops necessary to man's sustenance. The inference being of course that sahuaros are not necessary. But why not? Surely the Arizona landscape would lose its most salient charm if these strange plants no longer raised their grotesque arms against the jagged hills and the hot sky. They accent the desert. As for this "more and more" business, the Chambers of Commerce assert that a huge percentage of Arizona's financial budget is balanced by tourists from the East. And these tourists assuredly do not travel across the continent to gaze enraptured at fields of radishes.

Zephine would be happy to know that all kinds of stringent conservation measures are in place these days, including a requirement that saguaros at any site slated for development must be transplanted rather than razed. There are still swaths of virgin desert up here in the foothills, but new structures are going up all the time; as a result of the transplantation law, impromptu saguaro forests will appear beside construction sites before the plants are moved elsewhere. Exhibit A is the shopping center they're building a hundred yards down from my apartment. 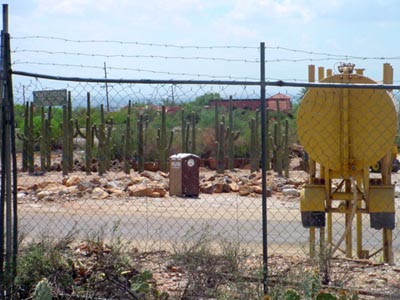