And despite last year's lessons, we're building new Saudi Arabias just as fast as we can find them.

After the collapse of the Soviet Union, the United States began quietly to build influence in the area. Washington established significant military-to-military relationships with Kyrgyzstan, Uzbekistan and Kazakhstan. Soldiers from those countries have been trained by Americans. Uzbekistan alone will receive $43 million in U.S. military aid this year.

Oil and gas have also enhanced the region's strategic value. Kazakhstan and Turkmenistan sit atop vast quantities of both. "We have an enormous economic and energy stake in this country," said a senior U.S. official in Kazakhstan. "It's part of our national energy strategy." By 2015, Kazakhstan and its Caspian neighbors could make up one of the world's most important sources of oil, the official said.

Though all five governments have embraced the outward symbols of democracy - elections, legislatures, courts of law and constitutions - none practices authentic democracy. All have preserved powerful, KGB-like political police forces. When elections are held, presidents win nearly all the votes, and serious opposition candidates are routinely banned. American diplomats have tried to convince Central Asian presidents that "winning an election with 60 percent of the vote is just as good as winning with 90 percent," one senior official said, but "they just can't internalize that point. They are complete control freaks."

Also, plans are in development for a solemn 11 September. I sure am going to have a shitty birthday.

Lord Love a Duck (1966). IMDB's plot outline ("Nerdy high school student tries to make dreams of beautiful girl come true," etc.) completely fails to capture what this movie is about. Nik claims it's a sort of proto-Rushmore, and one can see the resemblances. I'm still amazed that it got made.
—"We do not call it 'botany!' We call it 'Plant Skills for Life!'... Pistils? Stamens? Get your mind out of the gutter, man!"
—A solid 15-20 minutes of plot revolve around cashmere sweaters, most of that being taken up with shots of Barbara Ann and her father laughing hysterically while tossing cashmere sweaters into the air.
—The worst-choreographed martial arts scene ever cannot fail to charm; nor can the worst-ever-executed special effect of characters being tossed into the air by construction equipment. 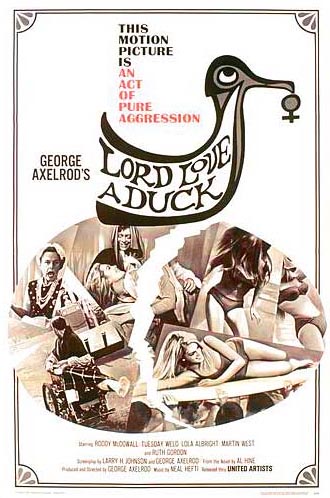